New Day Films hosts virtual events throughout the year. Sign up here to learn about our upcoming events. 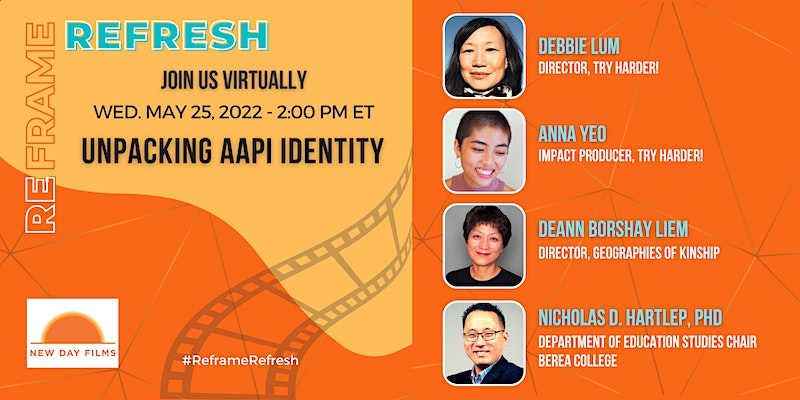 Join filmmakers Debbie Lum, Anna Yeo and Deann Borshay Liem along with Dr. Nicholas Hartlep as they discuss the importance of developing healthy AAPI identity in students and how struggles with identity can have a lasting mental health impact into adulthood. They'll also discuss how the documentaries, Try Harder! and Geographies of Kinship, can shed light on different dimensions of the AAPI community and how experiences like being a transnational adoptee informs identity. The virtual discussion will be moderated by Larissa Lam

You will receive the link to join the day before the event. Auto-captions will be available.

Reframe and Refresh : Unlocking Conversations About the Mind Through Film
Thu. Feb 3rd at 2:00pm EST

Join New Day filmmakers Kimi Takasue, Victor Ilyukin, and Olga Lvoff as they discuss making films about the inner workings of the mind, how these stories have changed people's perspectives and how their documentaries can be used by educators and mental health professionals. Moderated by Kelly Anderson.

From adding companies and government agencies to your definition of educational sales, to including virtual events, virtual toolkits and virtual conferences to your distribution plans, learn what new strategies are working for filmmakers. Join Keith Ochwat, Founder of Show&Tell and New Day Films members, Melissa Regan and Larissa Lam, as they discuss powerful opportunities to grow your audience and make money with your film.

Hosted by New Day Films. We are proud to partner on this event with a number of powerhouse organizations that are critical to the documentary field. Many thanks to our event sponsors:  American Documentary - America Reframed and POV; Center for Media and Social Impact (CSMI); D-Word; Film Fatales; Kartemquin; New York Women In Film & Television (NYWIFT); and Video Trust

REFRAME AND REFRESH is a new series for the education and filmmaking community to have refreshing conversations that reframe our perspectives. Come engage, bring your questions and share resources during this "Reframe and Refresh" time.
During this conversation with our panelists, DR. ALESSANDRA BAZO VIENRICH (Sociology Professor, Worcester State University), ADAM STROM (Executive Director, Re-imagining Migration), and DR. JAMES ZARSADIAZ (History Professor, University of San Francisco), we'll discuss among other things related to immigration and migration:
• Approaches to being more inclusive of various immigrant groups and looking for points of intersection between communities
• Using film and other media as teaching tools to humanize the topic of immigration and migration
• How to better integrate immigration and migration into other subjects

Join us for this needed discussion on how university libraries can broaden their media collections to reflect more diversity. How can university library media collections better reflect diverse perspectives? How has the pandemic changed approaches to acquiring and using new media? How can media creators better inform librarians about new educational content from diverse points of view? We'll discuss these topics and more with our panelists, Amber Hayes (American Library Association) and Eugenia Beh (MIT Libraries). They'll share their insights on current challenges and new opportunities to better reflect the world we live in through media.

September 21st, 2021, PEACE DAY SHOWCASE
Highlighting three new films focusing on different regions outside the US and their filmmakers.

About: А powerful short documentary about the human rights violations that occurred on the island of St. Croix during the post-emancipation event known as the Fireburn. Find out what sparked this fiery labor revolt that changed the lives and economy of the current day US Virgin Islanders.

About: When Marie takes a job as a maid in Singapore to support her family in the Philippines, she trades one set of hardships for another. When her husband back home abandons her family, she needs to choose between her personal aspirations and her family responsibilities.

About: Shipbreakers come from all over Pakistan to break down a decommissioned ship that is berthed at Gadani. When they enter into conversation with each other and the ship, they discover they have more in common than they imagined.

Short synopsis: A feature the chronicles the creative process of blind and low vision artists including a photographer, dancer, writer and the film's director

THE SEARCH -- directed by Melina Tupa

Short synopsis: The Search is a 24-minute film that explores Estela de Carlotto’s 37-year search for her long-lost grandchild after her daughter was kidnapped and murdered during the Argentinean 1976-1983 dictatorship.

MASSACRE RIVER: THE WOMAN WITHOUT A COUNTRY -- directed by Suzan Beraza

Short synopsis: Pikilina is a Dominican-born woman of Haitian descent. Racial and political violence erupt when the country of her birth, the Dominican Republic, reverses its birthright citizenship law and she is left stateless, along with over 200,000 others.

Short synopsis: Explores how the lack of media literacy is causing problems with mental health, confirmation bias, politics and other issues. Offers guidance to help combat mis- and dis-information -- how to properly consume media.

Short synopsis: A Chinese-American family’s search for their roots leads them to the Mississippi Delta, where they stumble upon surprising family revelations and uncover the racially complex history of early Chinese immigrants in the segregated South.

Short synopsis: Waking Dream weaves together the stories of six undocumented young people as they sit in limbo between deportation and a path to citizenship. They know their fate must go one direction and they are fighting for their future in America.

Short synopsis: Refuge(e) traces the incredible journey of two refugees, Alpha and Zeferino. They each fled violent threats to their lives in their home countries and presented themselves at the US border asking for political asylum, only to be incarcerated in for-profit prison for months on end. They represent thousands more like them who can't tell their stories.

WHERE ARE YOU TAKING ME? -- directed by Kimi Takesue

Short synopsis: In this mesmerizing, poetic journey through contemporary Uganda, award-winning filmmaker Kimi Takesue travels through the vibrant streets of Kampala to the rural quiet of Hope North, a refuge and school for survivors of civil war. By exploring the interplay between the observer and observed, this memorable documentary confronts the outsider's gaze and the challenges of cross-cultural representation.

HOW I LIVE -- directed by Meghan Shea

Short synopsis: How I Live follows the journeys of four children with cancer in Guatemala, El Salvador, Myanmar and Egypt and Ghana. Following them from diagnosis through treatment, the complex issues facing patients, families and healthcare providers emerge. The film documents the difficulties of accessing cancer treatment in low resource settings while providing examples of how global collaboration can lead to increased survival rates and closing global health inequities.

Short synopsis: The story of enforcement along the US/ Mexico border and how it functions. Through intimate portraits, raw footage and artful animation, Undeterred shows how life in one small town has changed and how local residents have organized to resist.

NOVEMBER 4th "MEET THE FILMMAKERS" Showcase #2 featured:
WITH A STROKE OF THE CHAVETA -- directed by Pam Sporn

Short synopsis: With a Stroke of the Chaveta takes viewers into the legendary cigar factories of Cuba to witness the survival of the collective reading of literature while tabaqueros roll cigars. We learn how through "la lectura de tabaquería" cigar workers have been entertained, educated, and maintained a sense of class solidarity.

Short synopsis: Soledad weaves live action and animation to tell the story of a woman from Central America who fled gang violence to seek asylum in the U.S., and shows what life is like for those imprisoned in detention centers while they await their day in court.

Short synopsis: ALTERNATIVE FACTS: The Lies of Executive Order 9066 tells the untold story of false information and political influences which led to the World War ll incarceration of Japanese Americans. The film also examines the parallels to the targeting of groups today and similar attempts to abuse the powers of the government.

CODESWITCHING: RACE AND IDENTITY IN THE SUBURBAN SCHOOLHOUSE -- produced by Mike Mascoll

Short synopsis: CodeSwitching: Race and Identity in the Suburban Schoolhouse is a mashup of personal stories from African-American students, spanning two generations, who signed up for voluntary busing to attend better-resourced suburban schools. It explores shifting race relations in the suburban-urban axis, teen self-perception, and the role gender plays in fitting-in.

Short synopsis: Hurdle reveals a riveting story emerging from the actions of Palestinian youth living under military occupation. Sami and Mohammad teach the creative practices of parkour and photography to the youth of their communities as a means to overcome seemingly inescapable obstacles.

New Day Films sustains the ideas that inspired its formation in 1971 - collaboration, hope and social change. Since its formation in 1971, New Day Films has operated as a collective and is democratically run by more than 100 filmmaker members. Our management team is elected from the membership, and every member plays an important role in operations. Today, New Day Films is the oldest continuously functioning film cooperative in the world – an extraordinary feat of economic democracy wedded to filmmaking excellence. It is poised to celebrate its 50th Anniversary in 2021 with a historic retrospective of 50 films that will travel the country and be accessible on digital platforms.